Thank you for contacting us!

We'll reach out to you as soon as we can.

Mayes Tyrepower Echuca is open and working to ensure our customer and staff safety during the COVID-19 pandemic. Find out more

PAFC finish out the season

It certainly was an exciting end to the season for Port Adelaide Football Club. It all came to an end at Round 23 where they met Essendon at Adelaide oval. They were taken down by the Bombers which caused many PAFC fans to be most upset, bringing their top 8 chances crashing down. For a few fans though there was much reason to smile.

For one lucky Tyrepower Blackwood customer, Maddie, her dreams had come true for the Round 23 game. Maddie had entered a competition rightfully named the Tyrepower Ultimate Footy Experience and to her great surprise, she won. The ultimate prize gave her a money can’t buy experience to toss the coin at the start of the game, have a meet and greet with the team in the locker rooms after the game and share the all the excitement with 10 of her nearest and dearest in a corporate box. Maddie was most grateful and will forever remember the experience that she had. She said, “I never win anything”, but what a prize to win!

The action on the field didn’t stop at half time. The Tyrepower Dash for Cash Grand Final was set to be a brutal battle between Daniel Pigliacelli, Beau Black and Jarrad Dartnall. This year each of the competitors has been representing a group or club who’ll share in a cool $10K if their representative takes it out. All three qualifiers put in a stellar effort but there could only be one winner. Coming from the back, Beau Black representing the Australian Army, stormed through to take the purse. An epic win that definitely would have been hard to beat.

Ending the season on the low side but there’s always next year. Well done to all the Port Adelaide players, a tough season but they gave it their best. Tyrepower looks forward to what next season will bring as we continue our Premier Partnership with the club. 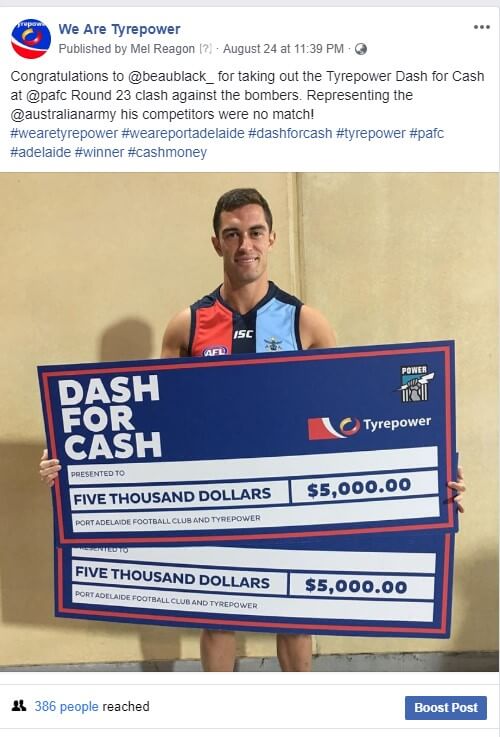 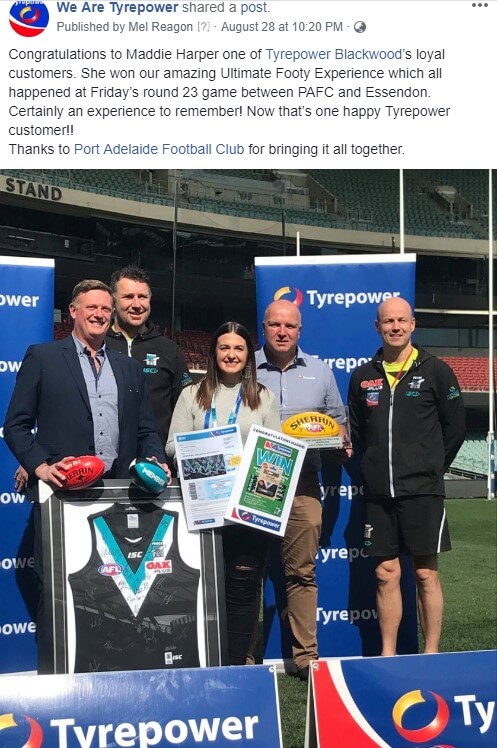 Thank you for contacting us!

We'll reach out to you as soon as we can.